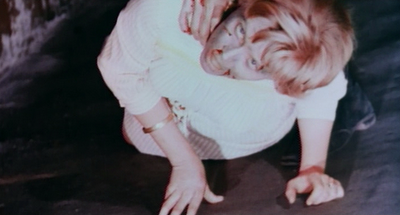 How gratifying for me personally, to finally engage in one of the main activities that the My Castle of Quiet radio program was designed for, to discuss horror and exploitation films in depth, and with one of the American masters, no less—Frank Henenlotter. For someone who makes "real" movies, Frank was quite personable, very approachable, a gentleman and a bona-fide scholar of sleaze. The Michaels, Hunchback and Diana, provided further input, chuckles, and good company.

Were that I could mix in directors, writers, archivists, and enthusiasts of horror several times a month with the soundtracks, noise and metal, I'd be sitting pretty. Ten million thanks must go to Mike Hunchback for setting up the meet, and to Frank Henenlotter for showing up, with his wealth of knowledge and friendly, gentlemanly ways (though the director curses like a longshoreman when not on mic, haha.)

After a year-and-a-half's worth of extending invitations to film people, give or take, it's terrific to have someone of Frank's stature show up, shoot the shit, and represent as a local boy to boot. It was great, great fun, as the archive and listener comments will attest, and I wore a shit-eating grin pretty much the entire time. You can hear the whole kit and kaboodle, making up approximately the first half of the weekly horrorcast™, the entirely of which is accessible by clicking on the very-gingerly placed assault victim above (taken from the title sequence of Herschell Gordon Lewis' Something Weird; she also seems to be turning blue a bit quickly, considering.)

Remember, those screenings of Frank's latest work, Herschell Gordon Lewis: The Godfather of Gore, begin March 10 at Anthology Film Archives in NYC, and continue for four consecutive nights, each night accompanied by two Lewis classics (including the rarely celebrated Scum of the Earth); Frank and fellow B-movie enthusiast and historian Joe Bob Briggs appear in person at the 3/11 screening.

I can only hope that Marina de Van, Damon Packard, Holly Woodlawn, John Waters and/or Asia Argento warm the Castle's guest chair in the near future.

Onto other matters, there was much love on and off the playlist for that classic Darkthrone track, and new work by Coprophagic Substratum (whose membership aligns with that of Sesso Violento and Cthulhu Youth, all from Complexo do Alemao, Rio, Brazil; blog links to come.)

Monday begins the 2011 WFMU fundraising marathon, with thrills, chills and surely some spills. I'll be co-hosting for Sue P.'s Solid Gold Hell week 1 on the Tue./Wed. midnight-3 overnight, as well as hosting my two usual slots (with illustrious co-hosts Nat Roe week 1, and Pseu Braun week 2) where you'll have a chance to win unique prizes, including, but not at all limited to, custom ringtones by Chromaa, a wonderful, eclectic art book compiled by Toronto native Davis Weir (dw from our playlists), a 3-pack of Physical Demon releases, a 3-pack of Anarchymoon Recordings' releases, and much, much more.

A pledge of $75 or over during my shift will automatically earn you a copy of the limited CDr collection Demo Hell, featuring exclusive tracks by Bob Bellerue, Physical Demon, Husere Grav, Skulleraser, Ungoliant (Joseph Curwen of T.O.M.B.) and Explosive Improvised Device, as well as classic black-metal demo tracks from Black Witchery, Hungary's Whisper, Helvette, and Demon Sword, all packaged in a gorgeously horrific watercolor sleeve by Sarah Zahn (aka Sarzan from our playlists.) Tune in and pledge! Support WFMU, and let everyone know that you LIKE noise, horror, and black metal on the radio.

On a personal note, I was moved to tears at the news of the loss of Clare Amory. My deepest condolences to Clare's fellow players in Excepter, including friends Jon, Lala, and JFR. You can read more about Clare's life at Jon's blog, here.

Posted by WmMBerger at 5:29 PM