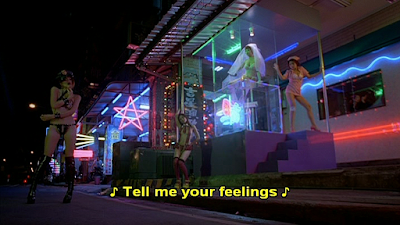 Yes, I went for it and chose a praiseful headline from this week's listener comments, because well, I don't get those every week; a real connection with some listeners is always assumed, but it's great to hear. I'm forever trying to raise the station of what I do, never sleeping on the job, trying to listen to myself, to my gut, and have a more-natural flow, rather than do a "metal chunk," then a "punk chunk," then a "space chunk" ... which honestly gets unchallenging for me too, and I can see by listener reactions this week, that leaning a little bit toward the past, toward the style of The Hip Bone show (my weekly stint on WFMU from 1984-1999) is a good thing, and I can still maintain the integrity of the My Castle of Quiet filter while doing so. I never want to just come in and play records, because hey, we can all do that at home. In brief, thanks for listening and liking!

Much of our first and second sets were singled out for praise, notably: Crazy Dreams Band | yet more 90s-vintage Butthole Surfers | black-space mess from Arkhtinn | pre-"dungeon synth" classic occult organ blobs from Jacula | new Pharmakon | newly released late-70s gems from Ju Suk Reet Meate | SIRE [again and again!] | Forteresse | Cult of Eibon... and heavy, heavy praise for our old friends Metal Rouge, with whom I admit I lost touch a bit, and was excited to find that yes, they've been working consistently since our two shows together in the earliest years of the horrorcast™. Their linked name above will take you directly to their bandcamp page, with lots of releases since the one we heard [from 2010]; I'll be there exploring, and you should be too.

Our last hour was all big chunks; more from the new 8-cassette Âmes Sanglantes box, and a full tape side by Warden, looming and quiet and draped in mystery, from a split cassette on Tour de Garde, still available. More great improvised sounds from Arrington de Dionyso & San(s) Kazakgsacar next week, as our time wound down and only a brief excerpt was heard.

I could comment on world affairs certainly, but since almost everyone does these days, why would my comments be a revelation? Better to just title this week's show I Dream of a Secular Utopia, as I do quite earnestly. "Religious" thugs have been running roughshod over the world and its populace for centuries now, and we are still early in the dawning of the Age of Aquarius (Hair soundtrack aside); I won't live to see The Age of Reason sweep the planet, but hopefully my son can enjoy a taste of the world as based on empiricism, science, and humanism—rather than arcane theology from old books, woefully misinterpreted over and over....

In film, what impressed me most memorably this week was an intricate horror-drama called The Blackcoat's Daughter, originally released in 2015 under the title February; I'll watch it again and like it even more I'm sure.

My Castle of Quiet stays with you through WFMU's summer schedule, at its current night and time. Lots of special programming still in the planning stages, but I can tell you for sure we'll be treated to another visit by M. del Rio, of the Seed Stock and Personnel Records labels, founder of Bone Awl and Raspberry Bulbs, on our June 13/14 show. An upper-echelon black metal collector, M. has joined us before, but not since 2014, so if you'd like to brush up, you can find those programs here, here and here.

Posted by WmMBerger at 1:43 PM No comments: Links to this post 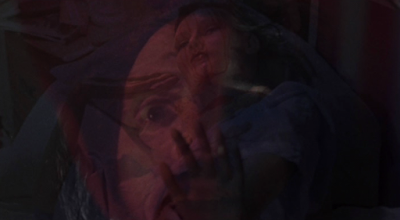 "Hold on to something that'll hold on to you."

In 1993, Gibby Haynes already had "the answer," and those Capitol-era, ascent-to-fame Butthole Surfers albums have a value that I didn't fully appreciate at the time; solid, crafty rock records that in their way still channel the bacchanal of earlier masterpieces. The continual thread of Haynes being a master songwriter could provide me with horrorcast™ openers for a few months at least, and maybe I'll go for it. ...and though at this point in history, the Butthole Surfers have become recognizable, they are not "ugh" recognizable, and I doubt they could ever be.

We also heard a moldy slab of funeral doom from Germany's Frowning | 1982-vintage M.B. stirred hungry souls | the SIRE full-length gets better every time I listen to it | ...also: Necroscythe | Pill Hag excellent 2-song demo | outstanding solo noise from Stroker | I'm only just cracking the surface of Crackdown, Âmes Sanglantes' massive, 8-cassette box on Hospital Productions (with similar offerings from (past Castle guest) Lussuria (already sold out!) and Dust Belt making a set, and for those who had $255 to drop, I'm sure quite worth it) | ...our show finishing on your belly with a great new piece from The Gate, and a new Alga Marghen LP of Ju Suk Reet Meate (Smegma) solo works from 1975-1980.

Probably the most worth-talking-about horror film I watched this week was Nathan Ambrosioni's Therapy, though not quite the jarring amazer that is the director's more-recent Hostile (discussed here previously), I'm just peripherally rapturous that someone with ideas carries on the tradition of 21st century French-language horror cinema; both features are well deserving of your time.

Take a break from the relative horror of the news, and envelop in something fantastic—pop out of your lock box, and DON'T BE GUTTED. Back with another My Castle of Quiet next week.
Posted by WmMBerger at 1:50 PM No comments: Links to this post

No Supertramp and no new Ulver!! Salut, Wm.!!

Pretty much the same thing, friend.

Vengeful ghosts, vengeful ghosts, VENGEFUL GHOSTS! If one believed classic Japanese literature, and the over-hammered plot trends of post-Ju-On J-horror (ugh), they are EVERYWHERE! No innocent soul is spared, doesn't matter what you've done or haven't done, these spirited spirits are pissed!!

And another thing—long, lustrous, black hair—nearly all of their women are born with it, so why is it so easily transmuted to the ABSOLUTELY TERRIFYING?!? I'm not scared of the hair. Maybe Japanese men are scared of their women. Hmmm?

At least with Kwaidan (1964), you know you are getting the OG Japanese terror, though even then, long hair is still not as scary as a tribunal of a dead clan and their attachment to one blind Biwa player. ...

There was a lot more too, music and er, TALK, but nothing I could say or play now would match or challenge the in-the-moment. AND ANOTHER THING...

When did the Conservatives take even our opiates away?! Father Burroughs would be A-PALLED. Now, a good old pain slog is the province of West Virginian unemployed coal miner/Trump supporters? I think not. This week's Castle was brought to you by 10/325 Percocet and Bubble Kush, so fuck that noise. NO political subset has a commodity on any escape from the world-at-large, especially in its current, new state of FUCKIN' DUMB is the currency/rule of law.

In movies I wish you would see: Applesauce (we heard the trailer this week), Onur Tukel's 2015 Woody-Allen-meets-severed-limbs horror comedy; Always Shine (I've got two sisters, I love 'em both the same, sort of identity-politic horror); and not for nothing, but The Visitor (1978) is newly streamable on Shudder and still kicks ass, in both visually glorious and unintentionally funny ways.

Back next week, and hoping to stay with you through WFMU's summer, we'll see, as I'm already racking up the tentative special programming for same.

Meanwhile, click on "The Woman in the Snow" above, from the aforementioned Kwaidan—blue lipstick, yah!...to enjoy this week's horrorcast™ archive.