this requires another bowl 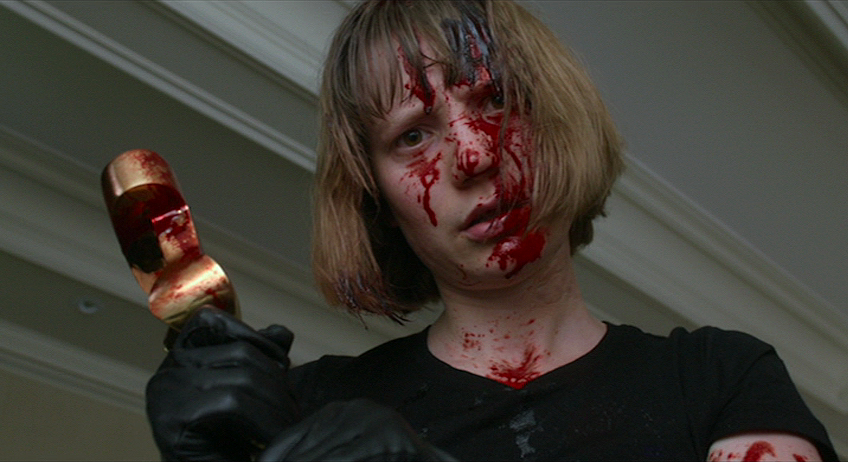 HUGE thanks to everyone who heaped appreciation and support on last night's horrorcast™in general, and on our special live guests in particular. Vorde brought it, slew it, and left a smoking husk in their wake. I feel so very fortunate, that every live My Castle of Quiet set is another opportunity to provide a platform for great bands to display their considerable talents. Vorde brought their own sage, an iron candelabra, and a statue of Pan, and I'm not sure that much more needs to be said beyond that!

As noted by myself and others, Vorde are one of the very best bands in USBM, forging a singular and vital sonic identity, and simultaneously pushing genre definitions. Ace black metal songwriters, they use the sounds of their individual instruments, and the glorious whole of what they do, to sculpt a divine idiosyncrasy, with death rock and goth injections providing variation and contrast. Vorde's finish with a Wipers cover-rendered-black was an exquisite treat! You can hear it all in last night's show archive, linked above, and keep your eyes out for a possible hard-copy release as well.

In the meantime, Vorde's self-titled debut LP, one of my favorites of the year, can be purchased here from Fallen Empire Records, and for those of you on a tighter budget, the digital album can be had for a "name your price" download.

Our first set was a blast too, worthy of hyperbole, with new selections and older favorites from Moss | NRIII | A.M.S.G. (saxophone in black metal, fuck yes!) | and the mighty Murw ...Also noted on our playlist, a song from Vrolok's Resurgence, one of the many great finds from my San Francisco shopping spree; a great new piece from our two-time guests Volahn, from their no-less-than-extraordinary double LP, Aq'Ab'Al; a song from the great new full-length by SF natives Bosse-de-Nage; and personal nods to perennial favorites Nuit Noire, and Ed Hall's "Deth." All this, and our show closer—a crafted mountain of rhythmic, electronic assault from Bizarre Uproar.

Our screen capture this week is culled from David Cronenberg's Maps to the Stars, and if you've seen the film, you'll have a fractional understanding of what our week's show title, "A Well-Deserved Pummeling" means, though ultimately it "means" many things to me. (I'm also just a sucker for a beautiful woman in blood spatter...) Click there to hear this week's program, Vorde's full live set inclusive.

Hope to see many of you at the WFMU Annual Record Fair this weekend; with the help JPG, last night's hardworking & talented audio engineer, I'll be holding down the Prison Tatt Records table, all three days.
Posted by WmMBerger at 3:36 PM No comments: 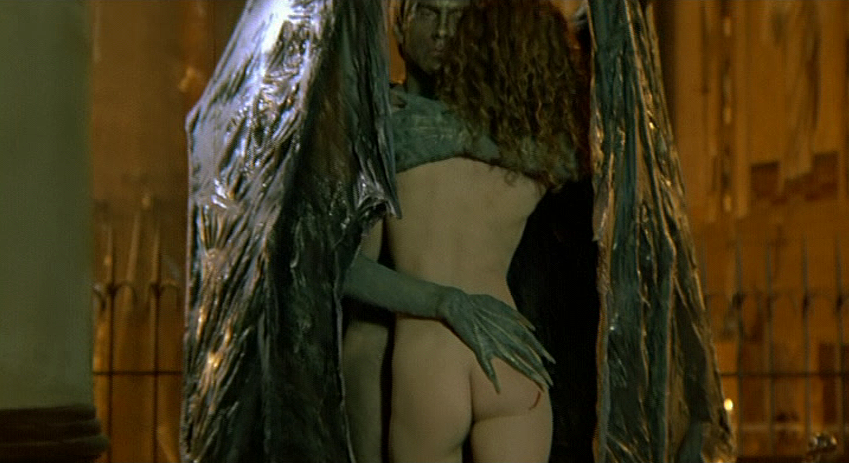 Good to be back in Castle environs, after a week abroad in the alternately sunny / foggy, hot-cold embrace of San Francisco, my home away from home. Happy also to share my many music-shopping "scores" on last night's program as well, and be assured that we have only scratched the surface of my blackened haul from Amoeba Music and aQuarius Records.

Want to say straightaway that I did catch one impressive live set, by Franco Falsini / Sensations' Fix, the loopy Italian prog artist, some of whose works have been thoughtfully reissued by the great, Bay-Area-based Superior Viaduct label. Franco is going it solo this time, making his way East, with a show in Columbus, OH, tomorrow night, Philly and NY shows to follow, though that info seems a bit difficult to scare up, so maybe someone can fill in those blanks for me. The set I saw in Oakland was largely beat-based (though not entirely), though with the Sensations' Fix characteristic vibe thoroughly intact; with hypnotic, ever-shifting synth groundwork, and Franco's melodic and processed guitar overlays. Totally worth it, for those like myself who eat this stuff up!

Highlights from our weekly horrorcast™ included a split-tape selection from New Hampshire's mighty Ramlord, who'll be bringing their gutsy blackened-crust to Lucky 13 Saloon in Brooklyn on July 26, along with outstanding black metal from Dumal (from PA, tapes on Vanguard Productions) and headliner Kult ov Azazel.

Was pleased to find a copy of the 2010 full-length, Reaper Subconscious Guide, by Norway's eccentric Furze (there's been another full CD since, in 2012) and give a song from the same its WFMU debut. Another debut was the title piece from Pig Destroyer's Mass & Volume, a newly-issued coupling of tracks left off 2007's outstanding Phantom Limb (along with Terrifyer, my personal-favorite arc in the enduring grindcore-doom project's history.) Also, in the past weeks, been leaning heavily on the great, new Anasazi album, Nasty Witch Rock.

New releases on Profound Lore Records also shone, with a selection from the GREAT new full-length by Bosse-de-Nage, and tracks from Menace Ruine & the new Full of Hell / Merzbow 2CD opus. Ferocious songs from Order of The White Hand and Peste Noire were also clear standouts on our playlist.

And speaking of playlist—to bask in a full, live night of Castleness, come out tomorrow to Lucky 13 Saloon, 644 Sackett St. in Gowanus, Brooklyn, where I'll be DJ'ing, in what will hopefully become a regular, bi-weekly stint. Say hello, buy me a pop, watch the dancers, and we can wallow in the blackness together.

Click on our weekly film capture, from Michele Soavi's The Church, perhaps one of my favorite horror films of all time, wherein the freshly demonized Evan claims another initiate in the name of the quite-damned titular house of worship.

and prepare yourselves...NEXT WEEK on My Castle of Quiet: LIVE MUSIC FROM VORDE!!!
Posted by WmMBerger at 2:43 PM 2 comments: 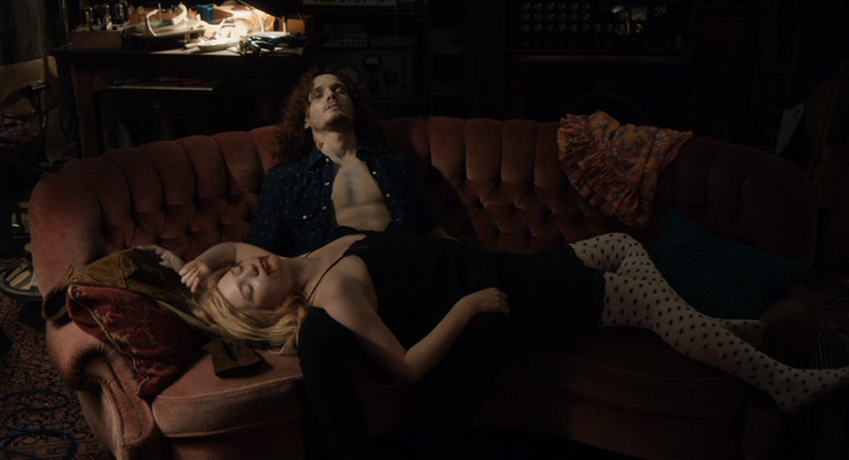 Taking a break from excitedly binge-watching Berserk,* to bid you all a fond, temporary farewell, and declare last night's Noise Bliss-Out #3 an unqualified success. Noise fills the human void like no other music; it gets its way out to the farthest corners of your being, to the tips of your capillaries, takes your head to a fuzzed palace, and lets you languish there for a while (see above; that guy's languishing days are, um, over.)

Fat praise for our opening set, a live cassette recording by Michigan's Slither, and a 2002 hunk of glory from Mr. Richard Ramirez—agreed, fuck yes, that RR track was especially great. People also dug the Xiphoid Dementia, whew—just heard that for the first time the other day, quite a piece—came in my latest "mystery package" from Husere Grav. ...

If you're in the area, I'll be spinning alternate Thursdays at Lucky 13 Saloon, 644 Sackett St. in Brooklyn, starting tomorrow night, 4.9, as part of a live show including Dead Infection, and Organ Dealer. (Subsequent weeks will more likely be just myself and my phone, overloaded with ugly music.)

I'm headed out in a few days for a week, to my second home, San Francisco—much eating of Indian pizza, tacos, desayunos, sweet Thai, fresh sashimi etc., family, great friends, and over-the-limit shopping at the SF Amoeba store—all on the pgm.

Thanks for listening and making our third noisestravaganza a blast. I could do it every week, to be sure...but I could do a lot of things every week, hehe ...

Click on on our blissed-out couple, above, from Jim Jarmusch's Only Lovers Left Alive, to reach the archived audio, playlist and comments for last night's all-noise horrorcast™.

*Episode 21, Guts and Casca finally hook up—whew! That was A LOT of sexual tension; I know it's going to end tragically / horribly, but hell, better to have loved and lost....
Posted by WmMBerger at 6:52 PM No comments:

As promised during the marathon...Has it really been over five years since My Castle of Quiet has presented a full three hours of the sweet, cranial crunch and mystic envelopment of noise? Why yes, it has! In the 80s-90s, we simply called it "experimental music," and though that banner suited at the time, it encompassed many more variant forms, and somehow the flat-out term "noise," which emerged in the 2000s, is more note-specific, saying less and saying more at the same time.No special-guest co-hosts this time, just a barrow-full of sounds, both new and old, most often relegated to our final hour of weekly broadcasting (so naturally, the "dam" of choice selections has been under considerable strain.)Grab your inebriant of choice, or none at all (as the music will more than likely do that for you), and tune in, starting @ midnight ET.

Click on the image above, from Seijun Suzuki's classic, hypno-gangster film Branded To Kill, to join the Facebook event. 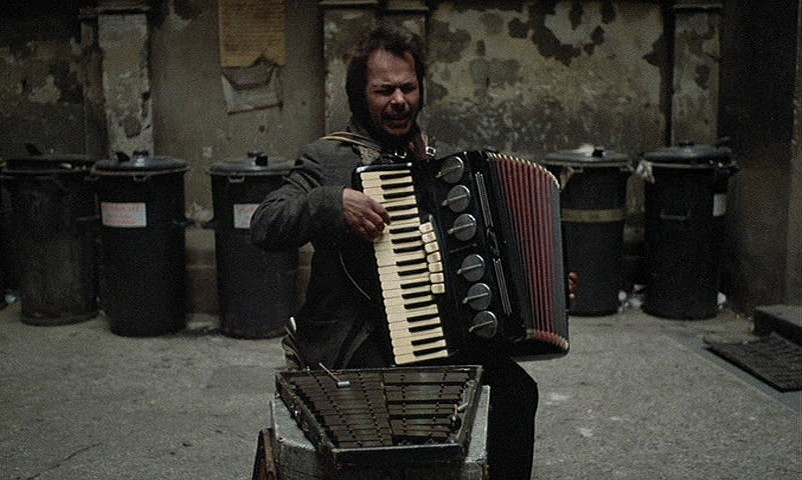 Indeed, praise! We NEED the Gnosis. ...and the cheese princess, ever resilient, acclimates in the face of ruin in the only way she knows how, by climbing up into truck cabs, selling favors....

Amazing how fevered a discussion can result from the mere posting of a photo of Werner Herzog's character Stroszek, as portrayed by the legendary non-actor Bruno S. The "message" of last night's horrorcast™ was "yes, wear that shit-eating grin, wear it with joy, but also remember the lesson of Stroszek—lead with humility!

Playlist praise for Ashencult | Pest (Sweden) | PiL's "Fodderstompf," oozing pure, snide derision | Cannibal Movie, from Avorio | Inquisition | P16.D4 (klassik!) | Penpals, with the theme from the Anime, Berserk ... personal thrills included yet another great track by Devilspit, from Grim, Hateful and Drunk, [GREAT album (on cassette from Caligari Recs.)], and the Fang reissue, of their Land Shark! EP (1982), a BIG record for WFMU in general, when I first arrived there in late 1983.


Thinking next week will be a great time for Noise Bliss-Out #3, what with my promising to do another such program after-marathon, and with the last two weeks being so very mtl., and my not having even done a full 3 hrs. of noise since 2009 ... Bliss-Out #1 | Bliss-Out #2 (with Paul Haney)

Thanks for keeping the spirit of far-reaching film chatter alive on the comments board, for dropping the occasional comment that applies to the radio proceedings, and for your robust participation in general, keeping me awake and vitally amused.

Do click on the tragic Stroszek, seen plying his considerable talent for a largely indifferent group of courtyard onlookers, to reach the archived audio, playlist and comments for last night's show.
Posted by WmMBerger at 10:34 PM No comments: