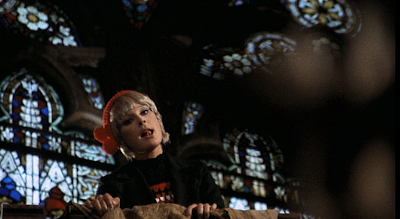 Whoa. The digital distribution of out-of-print and net releases by Rainbow Bridge / Justin Marc Lloyd is a veritable color-noiseter's field day, even if you just want to open your browser & listen. The c18 split between False Flag and Zone Tripper (orig. Forever Escaping Boredom), a scrying mirror to something truly new. The battle against mediocrity continues forever, it's an ongoing campaign that requires due diligence. DO NOT EVEN ASK FOR A SMOKE BREAK.

With that in mind, tired of everyone, no REALLY tired, of those refusing to live out loud on Internet social networks. WHY? What have thee to lose? What might your high-school friends think? ... SCREAM! Scream your freakishness from every mountaintop. (Listening right now, Neo Zelanda's vocalist sounds like she's screaming, "es Posehn," and last night in the car, Intolitarian's singer was surely saying "Mort Sahl" - it's all right there, just below the surface, and as Carlos Castañeda eventually concluded, you don't need drugs to get there.) Oh, and embedded at bottom is the music - AND ALSO, TOO...BEEN TRIPPING OUT TO "Inappropriate King Live"'s Datboonbaat - a sonic-garage-sale of Bladder Flask-caliber collage greatness.

And yes, I'll be returning to WFMU's airwaves, YET AGAIN, this time guest-DJing the great Distort Jersey City program, on Weds. 31st July, and thanks Deed Runlea for the opportunity. Nothing but a solid hour of modern punk and hardcore; my selections (7-8 p.m. ET), Reed's forum. ...And, a "proper" MCoQ fill-in for Diane's Kamikaze Fun Machine on 15 Aug., noon-3 p.m. ET. So there, you've been informed (better than being informed upon!)

And yeah, Elke. suck it. Suck it from across the atrium. You AND your little, red-bobbed hat.

Legendary way to go out Wm. 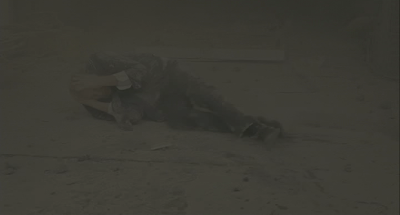 I feel like David Bowie—though many of you are probably too young to remember the many times that he announced that he was "quitting show business"—I need to actually spend some time away, to at least lend some legitimacy to all the goodbyes.

Last night was about as good as my relationship with radio ever gets; five bands, ones I hold in high esteem, playing live and generously donating their talents to the WFMU / Castle airwaves. Endless gratitude is due to Diane, Eddie and Dominic, and all the other band members, for helping me make the broadcast a reality.

The last four MCoQ live sessions, from Bludded Head onwards, will appear in due course over the Summer, as I get the time time to sit down and work the raw, master files and create mp3s, and scribe my impressions, memories and appreciation for each session in turn.

It was great to see many of our Castlehead regulars pop up on last night's playlist comments, and it's good to know that I can plop down occasionally on the WFMU schedule, and be reminded that the appreciation for the show will remain and still stir up the pot when it does.

Click on our screen capture above, from director Koen "Ex Drummer" Mortier's 22 Mei (more on this film in a future post) to reach the archived audio, playlist and comments for last night's Castle -in-exile 5-band black cavalcade.
Posted by WmMBerger at 1:43 PM 2 comments: Links to this post 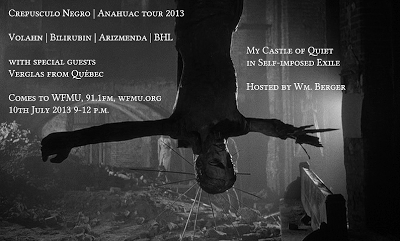 As part of the Anahuac Tour 2013 (you may recall the Black Twilight Circle's historic visit to WFMU in October 2011), Crepusculo Nergo returns to My Castle of Quiet tonight, this time with a four-band lineup of Volahn, Blue Hummingbird on the Left (BHL), Arizmenda, and Bilirubin. As luck would have it, the dark gods smiled upon us, and program favorites, the mighty Quebécois band Verglas, were also in town that same weekend, and joined us in the studio as part of the recording for broadcast. In editing / preparing the raw session files for airing, I can assure this session is a monster, and will take up most of our designated three hours this evening.

For fans of true black metal, and the wild, creative, and progressive directions it has taken in the past few years, this show is not to be missed. I'll be filling in for Evan "Funk" Davies, airing the whole, unholy mess, tonight at 9 p.m. ET. Tremendous thanks to Diane Kamikaze, without whom this massive, all-day session would not have been possible.

Tune in to reap the rewards. A more-arresting assortment of vocal stylings you'll not hear in one single session, that's for damn sure.
Facebook event.

I crawl to the console—bloodied, beaten, and clinging to life; my last, great act, to press "play" @ 9 p.m.
Live music begins promptly @ 9:05
WFMU 91.1 FM
WMFU 90.1 FM (Hudson Valley)
WNYX Montgomery
in Rockland County @ 91.9 FM
wfmu.org live on the Web, with real-time accu-playlist and message board.
Posted by WmMBerger at 11:55 AM No comments: Links to this post

...at least, I can still spit; we must have GRATITUDE.

Kris Kelvin was the man for the job.
Click, for archived audio, playlist and comments for last night's Kosmische-käste.
Posted by WmMBerger at 5:58 AM No comments: Links to this post

First things first, My Castle of Quiet returns tonight to WFMU's airwaves, for a two-week run, starting @ 9 p.m. (6 Pacific.) Having been deserted, disappointed, or otherwise unfulfilled by all earthly pleasures (offers welcome!), I'm a crummy Satanist / Hedonist at the moment, but also smart enough to know that when the magic doesn't work, it's not the magic that's flawed, it's me, and so I look to the Cosmos, and that's what tonight's Castle is about—a deep gaze into that endlessly vast, impossibly black void of nothing—and potentially everything. Tune in at 9, for probably more than a few surprises for regular Castle listeners; not that the show will be fun, or necessarily not fun, but I would never suggest unbridled enjoyment as a way out of one's trouble—NO! EMBRACE those bad times, and bad feelings! There's entirely too much giddy colour in global media as there is. Blecch!

Now, very graciously offered here is this exclusive demo track from Italy's Vardan (Catania, Sicily.) Vardan's work has been a personal favorite of mine for the past year or so, both his solo recordings and those of the outstanding duo project Anwech. Back in 2006, Vardan created the exceptional work under the name Leaden, Monotonous Foghorns of Molesting Department, a landmark of avant/depressive black metal, one of the strangest and most uniquely engaging albums in the entire contemporary black-metal canon. At the time of its release, this was my first exposure to Vardan's works, and I've come to know it so well over the years, owning it as I do on both factory CD and cassette. Monotonous Foghorns..., like Bone Awl's Meaningless Leaning Mess, or Moloch's Depressive Black Metal Plague, has implanted itself in my basic cellular structure; search cranial HD under black metal/modern.

You can hear several tracks of Vardan, Anwech and Leaden by using the WFMU Playlist Search engine, searching on the project names, and using the "jump-to" links to those tracks within past My Castle of Quiet broadcasts, as well as a track from Leaden's debut played on Sue P.'s show in 2011. 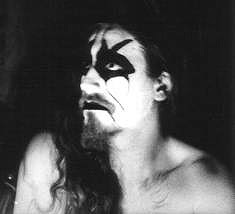 Vardan also works with several labels in Italy—Midwinter, Last Way and WarAgainstYourself, among others, and through trades, Prison Tatt has acquired some of his finest releases, available in our distro. Three by Vardan (including the phenomenal split with Striborg), one by Anwech, and the aforementioned, unforgettable sophomore release by Leaden. For more information, and to purchase within North America, please see the Prison Tatt distro page.

This track, in its final, non-demo version, will be released on a split CD with Burial Mist on the Black Raven's Blood label, both based in Russia. We find Vardan in "mixed sensation" mode, fast-slow-fast, with excellent overlays.

I'll be returning next week to WFMU at the same night and time (thanks to Evan "Funk" Davies for offering to have me sub-in) with a cavalcade of live-recorded, extreme/innovative/underground black metal—nothing less than the entire Crepusculo Negro 2013 Anahuac Tour, as well as Castle favorites Verglas. Not to be missed!
Posted by WmMBerger at 9:10 AM No comments: Links to this post