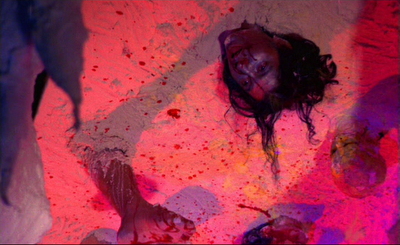 Our special live musical guest Instinct Control took honors last night, and boy are those sets something to get into, especially at around 8:30 this morning, when I'd hardly had any sleep. Ryan's sets—with Bob Bellerue's excellent live mix—are extremely rich in their tonal assault, highs and lows jumping out from around corners, pounding away at your psyche. A somewhat harrowing cab ride through a foreign city, though ultimately you trust the driver knows what he's doing, and is gonna get you there.

I'll drop EVERYTHING right now, mid-air, and 'splain to you what I meant by "A5," sure. No problem! Nothing but cavernous amounts of dead air being created over here.

Also grabbing much attention on this week's playlist were some late 90s recordings by Rusted Shut, released on vinyl in 2008 as the Hot Sex EP (thanks to King John for suggesting; made a great opener.) Also, some support for "Hellfuck Ritual" by Sad, from the split CD with Sapthuran, new on Regimental. That song sounded great to me, too, brycepunk—I love the way Sad build their hypnotic song structures with these simple, mournful, barre-chord progressions. The Marduk of melody.

Instinct Control's sets will post, next week sometime, as free, 256k mp3s for download, on both WFMU's Beware of The Blog, and via my curator portal at the Free Music Archive; in the meantime, you can hear the whole archive of last night's horrorcast™ by clicking on the poor damned souls above; condemned as they are to Coffin Joe's papier mâché hell, they've plenty of time to show you around The Castle.

I'm really fuckin' busy. I have Frank Henenlotter here next week! I have to think about how Basket Case made me feel! And I'd love YOUR HELP with some questions for the director. GOT THAT? I know I kind of slipped that in there, but fuck all, participate if you can. I'm lousy with Q&A.

And after that, March 1 and the Marathon, WFMU's 2011 to be precise; I'll be co-hosting for Sue P.'s Solid Gold Hell the first week, and hosting my two weekly time slots that fall within the fundraiser (week one with Nat Roe; week two with Pseu Braun.) For the size of a membership pledge or greater, you'll be one of the lucky few to own and receive Demo Hell, my premium CDr collection created just for this fundraiser, featuring exclusive tracks by Physical Demon, Bob Bellerue, Explosive Improvised Device, Husere Grav, Skulleraser, Ungoliant (of T.O.M.B.), and a fold-in membrane of classic black metal demo tracks. More on that later.

Also early next month, the 12th to be exact, I'll be co-DJing a massive event in Baltimore, featuring, among many other things, live sets by Castle favorites Kakerlak, T.O.M.B., Malkuth, and Lussuria, as well as a Prison Tatt records table, where show attendees can pick up one of the last remainng Grasshopper LPs, the new OPPONENTS cd, and hopefully the new T.O.M.B. one-sided LP as well (dark prayers sent!) There's more Prison Tatt news, which I'll share in an upcoming post.

I gotta stretch out, get some more sleep.
Busy!
Posted by WmMBerger at 2:27 PM