Driving a cab in Linden right now. Thanks for the energy boost. 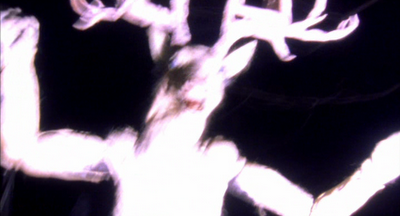 Happy to help. Watch out for the Wendigo on 1/9. He usually hangs out around the dumpster behind the Burger King on South Stiles.

Something I neglected to mention: Not three songs into last night's first set, Winamp decided to lock up on me, and refused to function. I took Winamp aside at box-cutter point, and explained why it would be wise to cooperate. I get hotheaded sometimes. This took some of a short while; software can be stubborn—especially freeware. Because of this, you may have noticed an interval wherein LP-groove thuk-thuk took over early on. It's ok. I will always give you this—much better than not knowing. (Besides, hearing it now, it kinda worked! Worked well!)

Yes, the Wendigo is awkward; like a stilt-walkers' skeleton for sure. But it is the mind of the child which transforms the Wendigo into something not quite as laughable—a wellspring of HUNGER.

Some love, some love. Most especially for two absolutely enveloping sets of acoustic terror from Hoor-paar-Kraat, last night's very special guest. Also then, for the new Chris Pottinger, Dwarves (vintage), and the soundtrack to Messiah of Evil. Indeed!

Hoor-paar-Kraat's sets will post as mp3s next week to WFMU's Beware of The Blog and Free Music Archive. In the meantime, you'd do well to bide your good deeds, take care, and click on the "Wen-dee-go" above to access the playlist and streaming audio of last night's full horrorcast™.

Posted by WmMBerger at 4:15 AM