HELLO FROM THE GUTTER WILLIAM!!!!!! 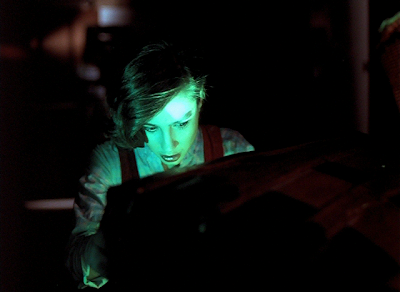 Never open the unnaturally glowing case or crate! Has this woman not seen Kiss Me Deadly? Of course, so many of the films we love so much, not least of all for their clunky spirit of inquiry, would be very, very short were it that the case never did get opened.

I've been pondering a lot lately about mini-universes, and about how everything small, every interaction, every relationship, every kiss—every set of music, in fact—really does contain all the information of some much larger version.

So I keep doing this thing, though in the late night, quite honestly, it does feel somewhat raped of its significance; just more weird shit relegated to the periphery. The playlist comments are fewer (though often more bizarro, which is welcome!), and the night gets sleepy as it wears on. "Why am I here?"

Some love on the comments board was felt (If I'm to read between the lines in several cases) for the Virginal Volcanoes track, Ghetto Rats, Missing Foundation, Cursed, and most definitely my special guest Two Years on Welfare, whose two sets were like magic beds, upon which we rested as they expertly navigated the stars, despite or perhaps because of Glenn Nelson's creative roots in "The Filthy." Psychedelic basement mire. Look for those sets, "Receiver," and "Swamp Ass," to post next week to WFMU's Beware of The Blog and via my curator portal at the Free Music Archive.
In the meantime, Jennifer's curiosity, with a single click, will take you to the full-length, streaming audio archive and playlist of last night's horrorcast™.

Posted by WmMBerger at 4:15 PM