...something to do with all the sandstone and hills I think. 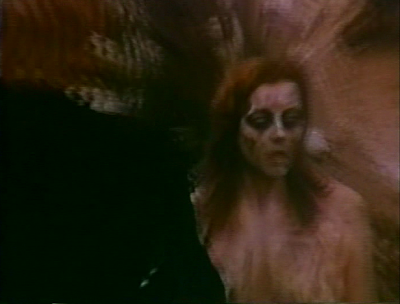 Some people might protest this screen capture—it's blurry, you can see some digital pixels being smeared—but I love it. It captures a certain Euro-"B"-film-faux-period-gloom-psychedelic undead-chick thing that really grabs me; very resonant. Love the face makeup especially.

Anyway that was a wild show last night; I felt like I was barely managing, but the show was nonetheless neatly playing itself. No worries.

A fair amount of praise this week for our post-theme opener, Spectres Over Transylvania, by Cultes Des Ghoules, a 2011 EP by the Polish band that really amounts to a five-song epic continuum, and is already becoming hard to find, though the label has recently re-stocked. (And in the interim, I managed to scare up a copy at Dark Descent Records. This is one you'll want to own, as the old TV commercial says.)

As is becoming customary, Wretched Worst made a smashing impression, that particular tape-side Can-like in its breadth and abandon, as did the Nihilobstat demo on Rhinocervs (that homepage-featured Odz Manouk / Absum split 7" is well-worth owning too, but then I repeat myself.)

Also dropping jaws were the Bizarre Uproar album side, from the split with Will Over Matter, and the vinyl reissue of Pete Shelley's pre-Buzzcocks' Sky Yen LP, a hypnotic and energized exercise in youthful Krautrock fandom.

Also, always welcome and appreciated, a discussion of H.P. Lovecraft and Arthur Machen evolved on the Comments board. This (Lovecraft more than Machen, a later discovery) was my formative literature, a huge part of why I am who I am and have the tastes that I do. Not everyone reads Lovecraft at age 8 or 9, but it would seem that myself and listener slugluv1313 are not alone. Perhaps Lovecraft-weaning is a Castlehead personality trait, or partial prerequisite, at least.

And, to round out our review, our post-game blogging, SiHV's comment, which usually comes to us from transit, as he goes over the archive the following morning, came instead to us live, always a treat. I'm glad someone had something to say about that Unkerd Wood tape, as I was left pretty speechless; is it black metal? is it people demolishing a room? I just know I like it. New-ish from Legion Blotan, and already sold out from Seed Stock. I like it better than the new Wold, dare I say. SiHV may disagree.

For now, please click on the focus-and-zoom-challenged lovely undead woman, to access the playlist and audio archive of this week's horrorcast™.
Horns up! (sorry, heard that this week, just had to use it....)