Album of the Day - Libra 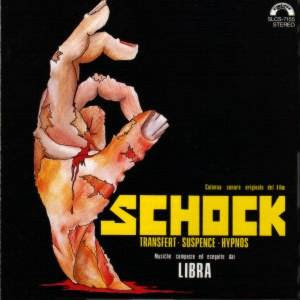 Though the film itself is a grindingly tedious, post-Exorcist possession motif, not worthy of Mario Bava's magnificent filmography which preceded it, redeemed only slightly by the presence of the wonderful Daria Nicolodi—the soundtrack to Schock (a film which apparently would potentially so scandalize the viewer that the title required an extra "c" for emphasis) is some hot-shit instrumental prog rock, worthy of the best works of Goblin. The score is quite varied, adding pieces for subtle electronics and piano to the expected, spooky, driven rock melodies that married so well to the European thrillers of the era.

Libra did have several personnel connections to Goblin, in the form(s) of keyboardist Maurizio Guarini, guitarist Carlo Pennisi and percussionist Walter Martino. The review of this CD reissue at Sea of Tranquility explains the history of the recording and the band in greater detail.