I thought a had a pretty swell digital image library, bizarre and random, but my library of gifs, pngs and jpegs pales in comparison to the comments column of Ken Freedman's WFMU playlists. As far afield as Ken's sense of humor—or anything else he does—Ken's image shack is a windfall of mind-bending animated gifs, foreign movie stills and other confounding visual ephemera (not to mention corn weenies.) In the spirit of co-opting, re-posting, and a general celebration of the hungry ouroboros that is the Internet, here is my favorite image from yesterday's Ken show: 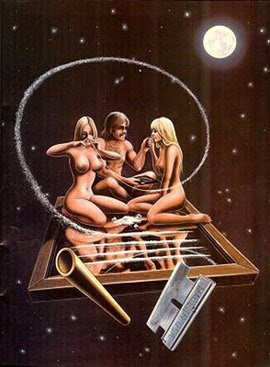 Says Ken: "I just browse around the web, looking for stuff that intrigues me. It's sort of the visual equivalent of pulling records for my show. ... I upload the images before my show and then create links, and during my show, I just cut and paste the links in to my playlist." Such modesty. I know from experience that doing a live radio broadcast, choosing music, keeping up with the real-time online playlist, and contemplating one's upcoming mic break already consumes a tremendous amount of psychic energy....

For more eye-popping entertainment, search the WFMU blog for Ken's Cleaning Out My Gifbox posts.
Posted by WmMBerger at 1:20 PM