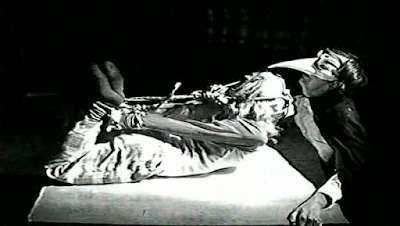 ...said the dude in the plague-doctor mask to the gal in the hog-tie face cage.

Ride For Revenge, with their clang and buzz, their sturdy, insistent mid-tempo declarations of Satanic love, opened our horrorcast™ last night with an extended epic that highlighted all their thudding, grubby mastery. ...Listeners also liked 80s-vintage slimy electronics from Master/Slave Relationship and Cat Rapes Dog.

Our still this week, which inspired great reaction & inquiry, is from a film called The Poughkeepsie Tapes, a "found-footage," serial-killer torture-captivity film on which my personal jury is still out...quite a compelling image, though.

Paul Bruno fills in next week, providing lubricious entertainment. See you in 2.

Posted by WmMBerger at 3:40 PM