My Castle of Quiet, Movie Night #2, tonight in Nyack. 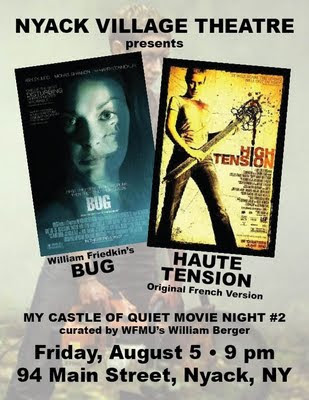 Do join Don Sigal of Opposite Records, Richard of the NVT, and myself, tonight, for MCoQ Movie Night #2.

Bug - William "Exorcist" Friedkin's 2006 feature; a brilliant treatise on the horrors of the mind—maybe drugs, maybe bugs. The tension builds perfectly, as the camera swoops around the room, plotting the characters' ascent into madness. Reality slips away, and the scratching is almost unbearable. Starring the excellent Michael Shannon, with a hagged-out Ashley Judd at her absolute best. Many thanks to R.W. Hessler, for his insistence that I see this one, now one of my favorite films of the decade.

Haute Tension (2003), dir. by Alexandre Aja, who's yet to top it, though he's tried. A brutal and merciless killer is roaming the French countryside—or is he? "Twist" endings aside, this is one of the best horror films of the 2000s, a real seat-jumper; the first film in many a year to make me gasp and/or feel shocked. We're screening the original, subtitled French version, a much better viewing than the somewhat thoughtlessly dubbed version that ran in U.S. theaters.

We really need a good turnout for this one, so that Don and Richard can continue to present alt. culture events at the NVT. Turn out, see the films, and wish me a happy birthday!

Posted by WmMBerger at 5:21 AM