I kinda like the combination of werewolf howls and grammatical discussions. 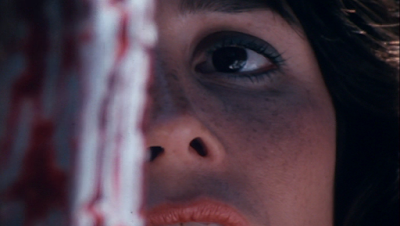 Keith Moon we lose tragically young, at 32...and we get 38 *more* years of the "geezer" Daltrey, and "I Am a Woman" Pete Townshend (remember that? It really happened, in 1990; Townshend declared himself to be woman, as I recall there was even a press conference; though many have now forgotten this odd tidbit of Who history.) ...at the time, a female colleague @ WFMU, who shall remain unnamed, said, "just because he's taken it up the ass a few times, doesn't mean he knows anything about being a woman.")

We always get the shit tradeoff; we lose MLK, both Kennedys...yet they manage to save Reagan in the operating theatre. Just saying. Can the proles have our day yet? Fuck sake.

On to last night's horrorcast™, there was a lot to like apparently for the 'heads; my mini-happy birthday to Moonie opening bloc was followed by something from Diabolical Fullmoon Mysticism by Immortal, to my ears a regular go-to of the Norwegian giants' catalog:

Our still this week comes from The Forest (1982), yet another chunk of American cinematic low culture—from virtually the golden age for such things—and probably worth a look if you fancy a camper/slasher tale with a prevailing "supernatural baloney" centerpiece.

Click on the image up top to reach the streaming audio, accuplaylist and listener remarks for last night's My Castle of Quiet.

Posted by WmMBerger at 4:38 PM