Dr. Who shit just got real.

There are problems, and then there are problems. All in all, this guy had a good night, one of the more memorable of his life for sure. You'll have to see Cheap Thrills to find out more. ...

My 2015 list of films and music is coming, still making notes...Cheap Thrills will not be on it, but it had some strong competition. Look for that post here within the next week & 1/2; in the meantime, here are my music and film lists from 2014 and 2013...just to remind you that I don't half-ass these things, I write 'em "meaty," and it's never just a line item list, free of opinion or context or commentary, films being such a huge, daily part of my life that the yearly posts start to write themselves in my head, especially once I'm watching these works for the 2nd or 3rd time. My list-keeping may have been a little too good this year in terms of music, currently hovering at ~80 entries.

Last night's show was a blast. Sometimes it's useful to have a "metal-light" program, as we did when hosting COMPACTOR last week, and Horoscope a few weeks past, to strike a victorious return, coming back car-crash force the week following. 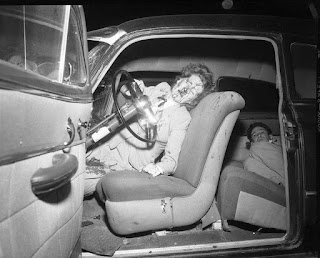 So click on the hapless-yet-victorious Craig, up top, to reach the playlist and audio archive for this week's horrorcast™...thanks for listening, back next week.

Posted by WmMBerger at 3:52 PM