could this be the gateway? have I arrived? 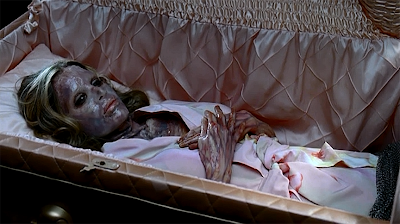 If a monster hath been created, 'tis thee that raised the My Castle of Quiet show up on its hydraulic platform, raised it high in the midst of an electrical storm, and well, as they say the rest, is histoire.  What a great way to be received upon my return to weekly broadcasting. Castleheads rule!

I've been wondering about the state of constant peril, and why it seems to entertain us so much. The most popular and perhaps most-innovative TV programs, mostly Cable-network-based dramas, but not entirely—shows like Breaking Bad, American Horror Story; even comparatively innocuous fare like the modern-day Get Smart-type show Chuck, differ greatly from the programs I grew up watching in that story turnover is almost mercilessly fast—the main characters remain in a state of almost constant peril; the danger of murder, the discovery of their illegal activities, and lovers embrace for only a moment before tragic separations. WHY are we so entertained by this? Is it the mere speed of our "information age" dictating that everything else must move that much faster as well? Or do we just get off on observing a life and/or lifestyle that would lead any ordinary or even extraordinary person rapidly into nervous breakdown? ...Unfortunately, perhaps, I'm old enough to recall when a VERY GOOD PREMISE was enough to carry a TV show, and with that premise established, plug in different scenarios and peripheral characters every week to keep it interesting; change up the "bad guys," one adventure per week, that swirls around that core premise, but at the episode's end, arrives back at that core premise, where at least everything is basically "ok."

Imagine if Breaking Bad had been done in the 70s-80s-90s, and how different it might have been. If memory serves, in very beginning episodes, the threat of very imminent discovery and the need to kill, simply in order to keep oneself alive, presents itself almost immediately; is a school teacher, with cancer, manufacturing meth with a reckless former student not enough for us? What a great idea! Couldn't they just have rocked a successful, semi-quiet operation for a season or two, or would the show have failed miserably, by extension suggestion that the lives of most illegal drug manufacturers/dealers would be too mundane/boring to carry a television show? I thought we craved "reality," but that's not how it seems; we crave instead a beefed-up, exaggerated, manufactured reality, one that could literally blow at any second.

What's wrong with us? Not to say that these aren't entertaining shows, and in some cases great (like Breaking Bad), but what happened to building a house and just living in it for a while? In a world where 43-second YouTube clips dictate our reality, maybe constant peril is the only thing that could possibly entertain most people now. The neo-realist, human-drama-based cinema and television I was raised on (which today might be considered "mumblecore") must seem horribly draggy by comparison. Grist for the mill, but I did really love Kojak in its day. ...

In other news, your playlist comments this week were inspired by:

TTHHHHHAAAANNKKKK YYYOOOUUUU for listening! Catch up with you again this Saturday, and your appreciation is much appreciated. ...

Posted by WmMBerger at 7:31 AM