*just* what the Voudoun Queen ordered 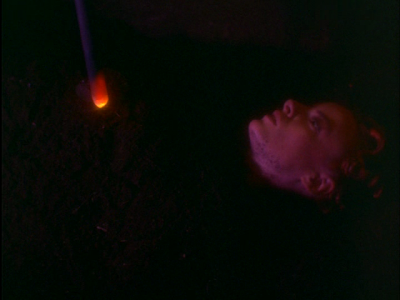 Ah yes, slugluv, "much negativity" in my evening as well, and I only wish that last night's horrorcast™ had been as soothing and comforting for myself as it was for thee. I tend to dwell on crossed wires and miscommunications, and let them eat away at me; I'm always seeking "closure," or at least resolution, to conflicts, and sometimes it just isn't in the forecast.

...and as to "Voudoun Queen(s)," you got me thinking about Maya Deren, and how she bombarded her system with amphetamines and Cafe Bustelo, until it killed her. What a pleasure she must have been to deal with on her coffee highs, albeit one of the great artists and personalities of old New York. I certainly don't need any "speeding up" myself—my brain does that all for me—so I can only imagine the great choreographer chewing up the wallpaper at 3 a.m. ...Perhaps if she were around today, Maya Deren would be a Castle listener.
Let's hope so!


A hot poker through the breadbasket, one shovel of soft dirt over my face, and I call it a day. I keep asking; the non-existent Great Creator keeps not answering. Prayers of "convenience" unheeded. (Probably at the service of those that check-in regularly, rather than just when they have a problem.)


The antidote to an oppressive Summer—kill yourself! We desperately need some thinning of the herd anyway. Only problem, those most inclined to suicide would probably be the ones we'd prefer to keep around, as I don't see the vapid, privileged-Manhattanite party crowd getting self-reflective any time soon. I often think of Laura Huxley's idea of spraying a riotous crowd with LSD—all that mirror-looking in one place, all fast and sudden-like! Suddenly, a thousand black-mini-dress wearing, underfed nymphs all confronting their shallowness at once, Mommy-help-me tears flooding the streets and running into the gutters ... one CAN dream!

On our playlist, I'm thinking Vile Gash may just be the best band of the moment, that Deluded EP being the "Nervous Breakdown" for the current generation of punks. What a ride! Like a fast, fat-free Flipper, VG pound out flat all the rage, frustration and angst of the moment—a brief, sudden, very-well-written, angry post-it note. Take that, world!

Y'all liked our "roaring start," a classic track from Venom, Belketre, Tukaaria, and WOLD, WOLD, WOLD! Tracks from Death Factory, Alberich and Lussuria, which closed out our last half-hour, I found personally very gratifying, kind of like this rain that's falling now ... much-needed fuel for the soul.

I'm off-air next week, heading to WVa to play Voice of the Valley—come out for the 3-day festival if so inclined; it's well worth it, my performance (first solo set in more years than I can remember) notwithstanding; check that link for the full, three-day, two-stage event lineup. Castle favorites C. Lavender, Telecult Powers, Grasshopper, Bee Mask, Leslie Keffer and Bludded Head are all performing, amongst a great many others; Forma, Tiger Hatchery, Reviver ... the list goes on!

Lots more planned for September and October, too, but I'll hold onto that news for an upcoming post.

Click on our doomed heroine, from Guy Maddin's Twilight of the Ice Nymphs, to reach the playlist and audio archives of this week's hard-boiled horrorcast.

Posted by WmMBerger at 1:28 PM