The Gate ... opens. LIVE on My Castle of Quiet, TONIGHT! 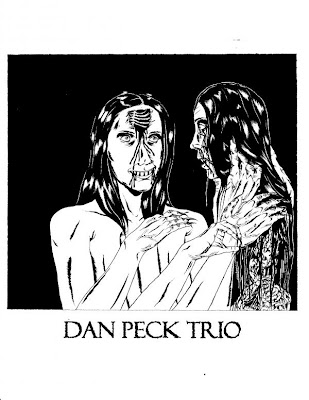 "...and so it came to pass, that seeds of Jazz were sown, yet sometime later, it was instead Doom that broke the dirt, hungering for sunlight." Thus The Gate were born. Originally known as The Dan Peck Trio (debut LP, Heat Retention Records, 2009), The Gate play doom like no other band that has earned that label. Doom conveys its tension not so much in the hits, the downbeat, but rather, power often lurks in the pregnant space between those hits—the lingering, hovering anxiety that wades in the space between the punches. The Gate are unique in many ways, firstly and most-obviously it's the tuba (played by Dan Peck) that guides the mighty beast on its path of destruction, joined by double (aka upright) bass (Tom Blancarte) and drums (Brian Osborne) on its take-no-prisoners journey.

The debut LP was right impressive, consisting of three intense chunks of jazz-doom, quite instantly defining its genre as its territory was staked. With a name change, and a new full-length (Destruction of Darkness, this time on CD from Carrier Records), The Gate peel back another layer of their own mystery, with three more slabs of heavyweight playing, but with the sensitivity that comes from individuals who really know their instruments, and communicate like seasoned improvisers. My Castle of Quiet is thoroughly excited to present this unique and fresh combo, with power and sophistication in every blow, absolutely LIVE on the WFMU airwaves, tonight.

I drive into town, with a trunk full of guns, ammo and crossbows; zombie flesh flapping off the grill, tonight @ midnight.
TG @ 12:30 approx.
WFMU 91.1 FM (NY/NJ)
WMFU 90.1 FM (Hudson Valley)
wfmu.org live on the Web, with accu-playlist and message board

Posted by WmMBerger at 9:44 AM