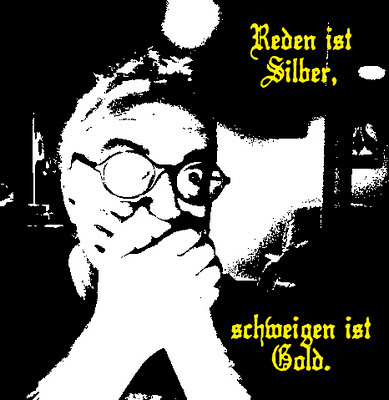 As I carried on a conversation, again on Facebook, that dreaded vessel of loose lips, with my friend and long-time supporter Ray Brazen, it occurred to me that perhaps some clarification was in order. I've been riffin' negative for the past two weeks, as I will do, and it's important to me that some critical distinctions are made.

WFMU is, and in all likelihood, shall continue to be, one of the best, if not the best, radio station on the planet, and there's a big reason for that—the sheer and ultimate freedom that it affords its broadcasters. Nowhere else could I do a weekly program quite like My Castle of Quiet. And as with any arts-based, idiosyncratic organization, it's the staff members, as well as the organization's most-devoted advocates, who are going to have the most-broiling criticisms. The very nature of the beast is that it's the insiders who will be the most impassioned about how things are done and run.

If my posts the last two weeks were decidedly absent of gratitude, it's only because that was not the issue at hand. I assume WFMU to be a democratic organization, where I've spent several decades, both on the deep inside as well as the periphery, and I assume that I can express myself freely as regards that organization of which I consider myself to be a part. Let's hope so, anyway.

Here's what I wrote to Ray, as I think it warrants re-posting here, for those who may not be privy, or may not be paying attention to—or may not give a shit, let's be honest—about my semi-private, semi-public, Facebook conversations—

"Well, there are many factors in play, not least of all my own persecution complex, but I did feel that I had some legitimate beefs that needed to be expressed. At the same time, a self-fulfilling prophecy, one that leads to my being simply off the air, does not serve my listening community, nor myself. I still enjoy doing MCoQ week-to-week, and would hope that I am able to express myself as I have, in a mature and educated manner, without "repercussions." I'm not backpedaling, not at all, but like any system, the one [already] in place at WFMU must be lived with. I am grateful for the fact that I have a show, as well as almost 100% programming freedom, and this should be noted, above all."

That pretty much covers it, and to all Castle listeners, my continued gratitude for your continued support. Whatever time the show is on the air, it's still ON, and I'm not blind to the fact that it's a rare and amazing opportunity.