William, you are on a whole other unfathomable level. Thank you. 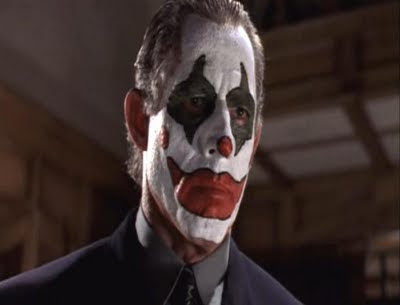 This is Mr. Mascaro. When you've got a guy like this doing your butlering for you (looks like he snaps necks for recreation, never smiles, always wears clown makeup), even armed motherfuckers are going to think twice. It's a great working relationship, that can really free you up to chip away at those plans for world domination. Just make sure to always give Mr. Mascaro his dignity; he's already got the clown face on, so do use some common sense, and don't press your luck. Mr. M. is pretty much the best feature (though there are many) of Blood Dolls, producer Charles Band's attempt to further extend the Puppet Master empire, and I would have accepted the franchise, in the form of about four or five sequels, as many of my Saturday or Sunday afternoons have been satisfactorily wiled away chomping on Full Moon fodder.

The passing weeks continue to leave me with a great sense of satisfaction, as WFMU and My Castle of Quiet approach their very-busy month of October (record fair, special programming, more surprises.) There's simply so much great, new music, and I watch the artists I favor, those I know personally, and those I relate to on collector terms, surge and rise and produce magnificent and memorable works, with the surety of more to come. For example, to see Baked Tapes rise to the plateau of releasing vinyl, and debut that endeavor with two full lengths by two bands that have shaped my reality since 2009, Telecult Powers and Grasshopper, is an odd personal best, considering that I really had nothing to do with it, except to provide encouragement via meta-fandom, airplay, and live, on-air performance opportunities (or, in the case of Grasshopper, releasing their now sold-out first vinyl on the Prison Tatt label; Telecult's PT record is in the works.) Still, it feels GREAT just to see this all happen and to hold the records in my hands.

In general, I have so much outstanding material at my disposal with which to craft each weekly horrorcast™, that I never worry—quite the opposite, the opportunity is so relished that it has for a long time now been my established and steady art therapy session.

But before I get all choked up...
I wish I'd recorded my neighbor saying "fuck you" and "fuck you, Ma" alternately, about 6-7 dozen times. It was quite an odd and destabilizing sound to wake up to the other morning. (Yes I am a substance elitist, and yes, alcoholism sucks.) Sarzan and I have been churning it into humor for the past days, though it was actually quite disturbing. At the same time, the pain of strangers never fails to make me feel a little less horrible about myself; such is human nature, I suppose.

Back to the radio show...
Playlist honors this week to Sound Out Light, the new Jabladav Ayr CD, Cripta Oculta, Smoke (that amazing improvisational black-metal band from the Netherlands), Depths, the great Demonologists, Hive Mind, and of course Grasshopper.

Weary of the circle of self-promotion, I leave you in the able hands of Mr. Mascaro, who will take you to the playlist and audio archives for this week's horrorcast. Thanks for listening.