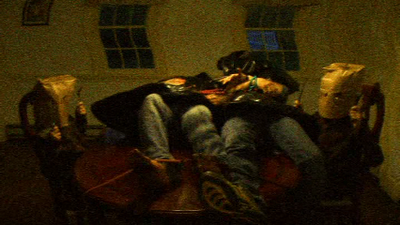 Pay attention to your kids, if you have them. Listen to the words between the words, or the consequences could be dire. Not likely as dire as that of the dumb fucks pictured above, but then that's why I love Home Movie, because the victims' greatest "sin" is obliviousness. If only I could make one hundred movies about that! Obliviousness could be to me as right & wrong is to Kieslowski, and unrequited love is to Wong Kar-Wai; but it's the Van Gogh syndrome—you can keep telling them, and telling them and telling them—they may even go, "oh, nice art!," but will they get it? NEVER.

Alas, I am but a not-so-humble free-form radio disc jockey.

I love that Husere Grav's unearthly sound-check rumbles were splitting the floor behind my first mic break; it gave the moment a "you're messing with these forces; you asked for them, and here they come!" feel. Perfect. I return to H.P. Lovecraft so often in my descriptions of these shows, and I suppose that's where it "begins" for me in general, and to be sure Lovecraft himself did not originate literary notions of The Abyss, but he was responsible for planting the image solidly in my brain. I mention this because when I opened the door to Studio B's live room to catch a few snaps of Husere Grav in action, abyssal terror was swirling unchecked around the room, and everything was a kind of black-grey whirlpool. This is significant. That one man can come on a plane from Texas to NJ, and render such power...but hey, that's what he was here for, right? If, for whatever reason, I'm not doing this radio program in five years (or next week!), I'll always look back in awe at the amazing canon of live music I've been privileged to present, and Husere Grav added yet another door to that hellborne advent calendar. Thanks, Todd!

Tell them about your gigs in October. TELL THEM!

Yes, yes. Thanks to Don Sigal, Castle supporter and honcho of Opposite Records (also performing/recording as The Alienist, Ken Timber and Sacrupture), I will be participating in some fine events in October at the Nyack Village Theatre in Nyack, NY. On Oct. 1, Castle favorites T.O.M.B. will be performing, along with other artists tba, and I'll be spinning grim interludes between the sets. At the end of the month, 10/29 or 30 (date tba) I'll be screening a double feature of hard-to-see horror films, including the classic American bizarro feature Last House on Dead End Street.

Castlehead love on the playlist for our honored guest, as well as Kyle Clyde, Gerritt, Ancestors, and bats (the animals, not the NZ popsters.) Remind me to speak more on bats next week.

Click on the dumb-fuck parents to get to the playlist and audio archive of last night's horrorcast.