A Week of Fucked-up film and more ...

Tumbleweeds will not roll over this space, despite the absence of weekly My Castle of Quiet broadcasts. This blog existed before the radio show, and it was my enthusiasm and "branding" expressed here (with the acknowledgment that the latter, quoted term is a simply terrible word) that led up to my radio shenanigans in the first place.

Music first; three fire-hot, new releases graced our program last week, two on the Texas-based  Out-Of-Body Records; the new tape and digital album by Compactor, a festival of fuzzed-out beats, to enrapture your mind and challenge the elasticity of your neckbone, and the vision-questy clickfest Psychosexual Spiritual by house favorite OPPONENTS (Telepathic Times full LP by OPPONENTS drops next month on Prison Tatt, and promises to be a landmark release for both artist and label.)

The third new release worthy of singing about is a piece of 7" vinyl that finally brings together two of my favorite grind bands currently strafing the globe, The Kill (from Melbourne, Australia) and The Communion (their Prison Tatt one-sided LP, A Desired Level of Unease, is almost sold out from the label, with 4-5 copies remaining.) EP available on Fat Ass Records out of Poland.

With the understanding that I still love my metal, but am also effervescing over some lighter stuff as well these days, the great Desire Records, from Île-de-France, has released a swell compilation of neo-darkwave tracks by artists that will put you firmly back in the era of angular haircuts, b&w-photo heroin chic and films like Christiane F. and Luc Besson's Subway. Excessively retro? Without a doubt. A good overall listen, that features some great songs, which will assure you that the Dominatrix does in fact sleep tonight? Absolutely, yes. The highlight, without a doubt for me, is Linea Aspera's "Attica", with its "you're never gonna let me sleep" refrain. You may buy the reissued LP (300 press) from Desire, or stream / download the whole album at the embed below. >Desire Records' Twitter feed<


The second musical milestone I'd like to share here is the soundtrack to The Taint, a film that Todd Watson insisted I see, a labour-of-love gorefest of exploding cocks, crushed heads, funny dialogue and clever visual ideas. Director Drew Bolduc has an elaborate page of Taint-related merch to sell; love the t-shirts, posters and hand-painted, one-of-a-kind VHS editions (!), and the score m4a download is a steal, at a mere $5. Again we're back in 80s analog territory, this time mostly instrumental, with some very cool melodies/themes, and well worth checking out, especially if you're married to things like John Carpenter's score for Assault on Precinct 13 (which I am), and/or you love the overall sound, but the vocals on the previous embed make you cringe.
My friend Tracy Widdess, who also co-hosted our last weekly broadcast, stuck around for the week, sharing with me some amazing films, a few I didn't know existed, and some others I'd always wanted to see. She has incredible access, via a closed-server, online film-fanatic community, where just about anything you could think of from decades past is likely available.

First up, a riotously debauched sin-fest of a movie, the Swedish Breaking Point, from the same director that brought us the unforgettable Thriller: A Cruel Picture. Over-archingly better, depending on your need for female or male protagonists / antagonists, Breaking Point is the story of man who, at least temporarily, loses all touch with any sense of socially acceptable "moral" behavior, raping random women and hitchhikers, killing cops and mobsters, even hiding his cum-load in a sexy co-workers' morning coffee. Taken with more than a few grains of salt, it's the proverbial "wild ride," placed somewhere between drama and intense, unbelievable male fantasy.

Next, and very highly recommended, is Death Bed - The Bed That Eats, which I admittedly resisted for years, as the title and premise just seemed so ridiculous, but boy-oh-boy was I wrong! The 'net-wide lambasting of this film as "the worst film ever made" is completely unfair and unwarranted, especially with unintentionally appealing, artless fumbles like The Room out there. ... A voracious, evil entity, borne of a demon's tears (!) lives inside an antique bed, devouring any and all consumables that set upon its mattress—humans especially, in addition to the woebegone 70s "bucket" of chicken, bottles of wine, dogs, and of course the occasional necessary dose of pepto. While this may still sound silly, the film is a visual treat; colorful, dark and eerie all at once, with the added plus of a narrator—the departed spirit of a thinly veiled Aubrey Beardsley, trapped behind a painting, the death bed's eternal and snidely unwilling companion. The overall mood and visual palate of Death Bed - The Bed That Eats will bring to mind classic 70s films like Equinox and the Jean Rollin vampire features.

Next up, a film I'd been waiting years to see, the Japanese head-scratcher Violated Angels (1967; see screen capture up top), by director Kôji Wakamatsu, known, amongst other titles, for Go, Go Second Time Virgin, a film readily available on DVD, but in my view a lesser work. ...Angels uses the 1966 Richard Speck case as its jumping-off point—a nurses dormitory under siege from a single male antagonist, hell-bent on murder with no rhyme or reason—and reimagines those basic facts in a decidedly Japanese fashion, with shocking murders, minimal dialogue, pregnant, impressionistic pauses and image collage, and leaps back and forth from color to black and white. This man is tormented by beautiful women, we never find out exactly why, as almost nothing is explained or delineated, and the film itself is framed at beginning and end in still images of Japan's political unrest of the time. A triumph of understated Japanese exploitation film, up there with things like Naked Pursuit. 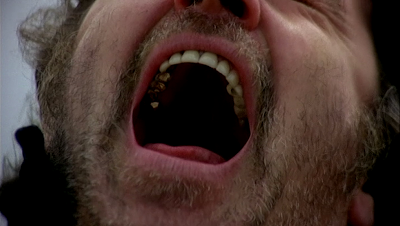 Lastly (though Tracy and I watched a great deal more, and I'm cherry picking here, by necessity) comes two great, disparate works of cinema by director Jerzy Skolimowski—The Shout, a creepy, surreal tale of two parallel events—a cricket match on a hot Summer's day, and a weird, Bergman-esque power struggle at a country cottage between a sound artist (played by John Hurt), his wife, and a most-unwelcome and mysterious traveler, played to the very hilt by the great Alan Bates. Also by Skolimowski, the fantastic Deep End, a colorful, raucous sex comedy / tragedy, perhaps most famous amongst music fans for including the song "Mother Sky" by Can. I can't even begin to describe the rich palette, fast-paced dialogue, and hilarious scenarios that fill this film almost to the point of bursting, its situations all too funny and its tragedies all too real. Deep End is a cinematic masterpiece, and in an ideal world, should be as heralded as any great British-made film of the time, from O Lucky Man! to 2001: A Space Odyssey. That Deep End is not available on Region 1 DVD is nothing short of criminal.

For now, I leave you with this. My dear friend Doris, from Vienna, slicing a decidedly phallic obelisk with a Samurai sword. Gentlemen, cross your legs!

Posted by WmMBerger at 1:26 PM