Metal macht frei—like the swift lash of a Samurai's blade.

Here are some free, exclusive tracks from My Castle of Quiet friends to metal-up your day; the first, an Abysmal side-project, devoted to Mercyful Fate cover versions, Etaf Lufycrem—A mix of modern, edgy death touches dress up the classic "Into the Coven" >>>

Etaf Lufycrem - Into the Coven

You can still get the hot-as-fuck 2012 LP reissue of Abysmal's two demos, from '92 and '05, in the Prison Tatt distro—an outstanding death / thrash / black collision, sounding mighty with a remaster-for-vinyl from Pirates Press, self-released by the band.

Up next, a new track from Netherlands' Smoke-madman Kenneth vH, constantly reinventing himself, rigorously active in both the noise and extreme-black universes, also running the staggeringly quality-consistent tape label The Throat. Godsamme is K's latest raw-black guise, and he brings us a cover version from Haat - "Dood Aan De Christen," with added filth >>>

Smoke have a roaring one-sided LP, their swan song, coming up in the not-too-distant future on Prison Tatt.

My week in film had its ups and downs, a very big "up" being Takashi Miike's 2010 Shogun-era period piece 13 Assassins. Having moved on from the intense, colorful insanity of brilliant early works like Ichi the Killer and the D.O.A. trilogy, Miike—another ultra-prolific genius who's constantly reinventing himself—brings us an epic, bloody tale of vengeance and honor, in flat, overcast hues—with lots of mud, blood, clouds and long journeys over land. Apparently a remake (orig. 1963), Miike easily claims this Samurai-Wild Bunch tale, with his own, unique intuitions of horror and the absurd, whilst keeping the overall presentation very traditional. though it's never boring or bogged-down. For more info on 13 Assassins, click on the screen capture up top. 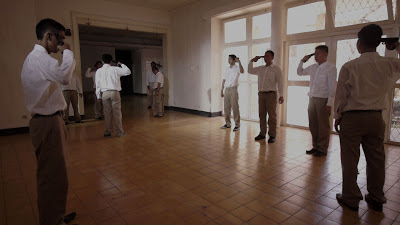 13 Assassins rocked my week, making up for the relative disappointment of V/H/S 2.  For those who shared my enthusiasm for V/H/S (2012), that film was all about great story ideas, and a terrific over-arcing concept. Now a self-aware "franchise," V/H/S 2 generally suffers from a lack of those very smart and shocking ideas that made the first movie great. What do we have instead? (minor spoilers ahead) ...a prosthetic eye that can "see dead people," a truly tired retelling of the damned organ-transplant in film (an idea that goes all the way back to The Hands of Orlac (1924)), and audaciously featuring a little ghost-girl in pigtails, a white dress and church shoes. The very-welcome surprise of the first film was that it in essence avoided such horror clichés, "like the plague." ...And what next? Zombies. A very-predictable, rapid-spread living dead sequence. Need I say more? The producers saw fit to make the above-described the first two sequences in the film, a most-tragic proposition, especially to a jaded but always hopeful deep horror fan such as myself. The good news is that V/H/S 2 starts to pick up considerably from the midway point, with two very-impressive segments, that again remind us of how and why V/H/S the first was so dazzling: a Filipino tale that gets started in Jim Jones/Heaven's Gate territory, but rapidly moves on to pure insanity; an exploding guru, fully grown demon-birth, and some raucously hanging snot (the latter an over-the-top wink to The Blair Witch Project.) It's this Filipino short that carries V/H/S 2, and without it I would have been so restless as to not even finish watching, missing out on the truly scary, and very-cleverly-done alien abduction scenario that makes up the film's last big chunk. And here's an idea: this latter sequence, "Slumber Party Alien Abduction," is all shot on dog-cam (!), forcing the point of view to linger at human-calf height, one of those very smart touches that V/H/S 2 needs a whole hell of a lot more of. I have no doubt that if there is a V/H/S 3, it WILL be in 3-D, but hopefully will also overcome this sophomore slump of a sequel, that's generally starved for fresh, raw concepts.

Posted by WmMBerger at 3:30 PM