Music Clip of the Day - Necrophagia 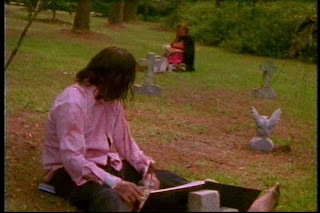 Necrophagia attempt to recreate the atmosphere of their favorite no-budget horror features (Last House on Dead End Street, for example) in this excerpt from their DVD Through the Eyes of the Undead. This is an avi rip, much better quality than the version streamable on YouTube, and you get the additional bonus of a 20-second rant from the drummer about what a great movie Amityville II: The Possession is (apparently, someone else agrees, as that link will take you to an entire Web site devoted to the film.)
Necrophagia - Embalmed Yet I Breathe (99.45 MB)
Here, you'll get to see Phil Anselmo (who played guitar and co-wrote the album from which this track comes, Holocausto de la Morte) drink Wild Turkey in a graveyard and smoke a joint with a witchy, paint-huffing maiden, among many other homespun visual delights. Holocausto... and the Black Blood Vomitorium EP are by far the band's finest work, no doubt due to Phil's evolved talents.
Link available for 7 days or the first 100 downloads.
Posted by WmMBerger at 1:43 PM