TONIGHT on The Castle—The Return of C. Lavender! 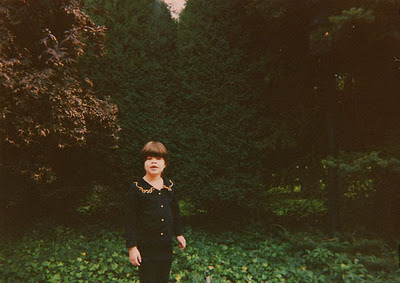 Sounds ominous. Like a sequel that's going to be better than the original. She's going to rip out my esophagus, and tie off her pretty hair with it. One can hope.

One of the earliest friends and most consistent supporters of My Castle of Quiet, sound artist C. Lavender returns tonight, not to perform—though you can hear her magnificent set from the show last year at this link—but to co-host with yours truly, as she's done before, bringing her dour wit, casual charm, and some musical selections of her own for y'all Castleheads. Perhaps we'll also premiere a track from her new tape on Spectral Evidence, Meet Me at the Station. I'd say definitely. Don't miss it; C. Lav is bestowed the dubious honor of being the most complimentary co-host the show has ever known, which is to say that she digs the music (though not ALL of it), "gets" the show's reason for being and has from day one, and tends to give me scolding and praise in just about even measure.

Don't miss it; we start at the witching hour.

Also, tremendous, hearty HAILS, my goblet overrunning with mead, to all the devoted Castleheads who were able to contribute to the show during last month's WFMU "stealth" Web-only fundraiser, putting MCoQ's individual show-total at 100-fucking-percent. You've all done me proud, and I dive in this week with renewed vitality (though I always give my absolute best.)

Seriously, thanks! We'll see you tonight on the playlist.

Posted by WmMBerger at 8:25 AM