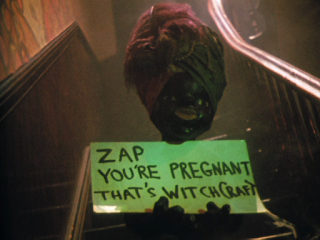 I envisioned a dusty parking lot, not here, perhaps in the part of N.J. where things are a bit more spread out, where they actually have fields and forests—where the name "Garden State" was earned. And in that wheezy lot, a pickup truck, parked strategically for maximum highway view, and slung over the bed a banner, made with maximum care out of a white bedsheet and a can of Krylon, a banner that reads, "Welcome Black Twilight Circle."

Of course, it didn't happen that way; it happened with hastily texted PATH directions, and a mass of hearty-looking, black-clad musicians appearing at WFMU's door in downtown Jersey City some time later. Wary smiles and hearty handshakes, it became slowly clear to me that these guys had immense humility to match their immense talent. Who would think of forming a collective of black-metal musicians, consequently strengthened by their unity, and a certain quality standard that you knew was being brought to the table? Artist collectives were a thing of the 60s and 70s, right? Well, the music was never like this.

This was, without doubt, one of the most historic radio events I have ever been parcel to presenting, creativity and artistry abounding around the room and onto the airwaves. Immense and powerful sets by Arizmena, Volahn, Shataan, The Haunting Presence (a personal favorite; unholy, dark guitar!), Kuxan Suum, Kallathon, and Dolorvotre (who were able to blast out only one, earth's-crust-shattering song, as three hours does eventually run out, remarkably so.)

I'll save my deeper observations and musings, perhaps, for the larger post, on WFMU's Beware of The Blog and Free Music Archive, where these historical sets will be shared on mp3 for all to download and enjoy (an idea, by the way, that I did not at all have to oversell to the BTC, their notions of collectivism and community again coming into play, exemplifying their honor.)

So listen, for now by clicking on the voodoo priestess above, because I still can't wrap my head around what happened, and I was there! These sets awe me in their greatness, and in the extraordinary diversity and range of human expression presented from group to group. Though many projects in the BTC share members in common, depending on who is driving the bus, the musical context and feel represented by each project is totally different. They call this black metal? It's great American music, based in metal, but with no boundary not worthy of knocking down.

Two people outside of the BTC deserve huge thanks—RB from Seed Stock Records and Raspberry Bulbs, for setting up the event in the first, and Diane"Kamikaze" Farris, for translating the brilliance with her own expertise, and the help of WFMU's mighty mixing desk.

In the regular order of business, playlist notices also went out to the Phantasm Theme by Fred Myrow, newly released 1992 recordings by Christoph Heemann and Jim O'Rourke, and Sleep of Ages (thanks, Travis J.!)

One week from Thursday, My Castle of Quiet presents ""Mr Matthews' True Color of Venus Revue featuring High School Confidential" as the show, now deeply energized, goes on and on. Special guest Bob Bellerue also engineers that evening, and co-hosts and co-DJs with yours truly.

My thanks seem meager in light of what's presented here, but I give them nonetheless, to Eddie and the rest of the Black Twilight Circle, for sharing with WFMU and The Castle their incredible gifts. This show was one for the ages, and I'll proudly present it to my grandkids, or anyone else who asserts that I "don't do anything." Fucking great, beyond all measure.

The BTC is, I'm sure, in no small part responsible, for our program being 23% of the way to our pledge total / goal of $1,000 for the month of October, as it's only the 8th, and WFMU's stealth fundraiser is largely a Web-only, non-intrusive affair. Thanks to everyone who's pledged so far! You too can participate, by employing the pledge widget atop any Castle playlist page.

We move on, from the horrorcast™ to end all horrorcasts, it seems, forever ready to wage war with the future, strengthened by our experiences here. Listen, and be truly amazed.